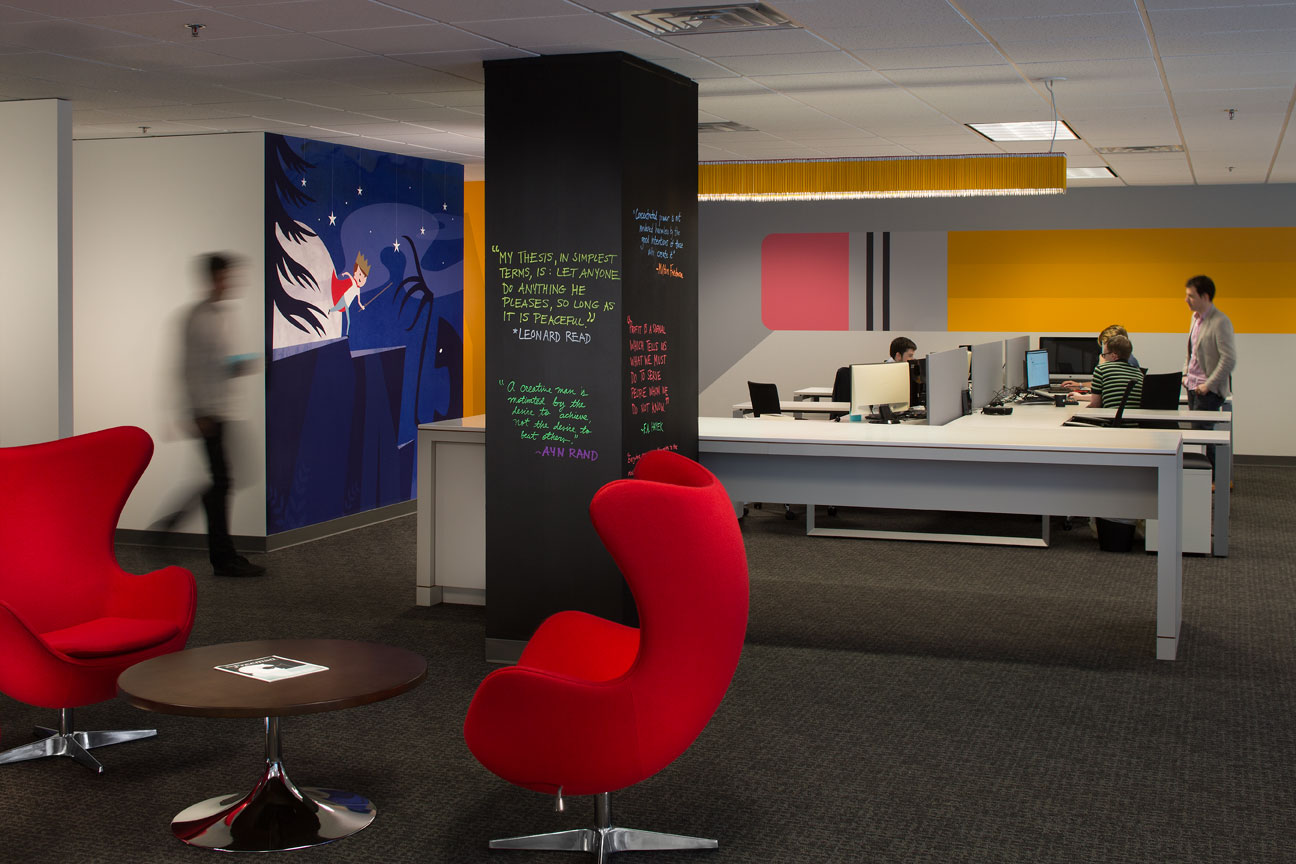 The Foundation for Economic Education (FEE) was founded in New York City in 1946 as a national “think tank” focused on free-market economic policies and principles. After selling its 19th century-era Westchester County mansion-headquarters in late 2014, FEE sought to establish a new permanent home in Atlanta, Georgia. The space had to both reflect the youthfulness of FEE’s young staff as well as its new mission to teach high school and college students the basics of economics and the principles of a free society.

The project was also a special opportunity for Lorenc+Yoo principal Jan Lorenc to collaborate with his son Richard Lorenc, FEE’s Chief Operating Officer, along with Gin Ma at Atlanta-based architects Hendrick, Inc.

Upon entry, a large FEE logo appears on a glass pane that permits visibility through the space. The flow directs staff and visitors past the James M. Rodney Wall of Ethical Entrepreneurship, which honors substantial FEE investors over the organization’s 70-year history. Atlanta-based artist John Hartwell created “low-poly” portraits of both the investors and many of FEE’s intellectual heroes, including John Locke and Adam Smith. Graphic art throughout the space was printed and applied by Parallax Digital as single pieces of digital output.

A large, open cafe area with modern furniture and a bar with stools is the first large area, featuring a chalkboard pillar onto which inspiring quotations are written in bright colors. The large word “Liberty” on the southern wall adds color and character, as do framed covers of FEE’s magazines with artwork designed by Hello Waldo.

Early in the process, FEE decided to use the space as a tool to attract and retain talented staff who would otherwise be working in Washington, D.C. The team also pursued an open office plan, setting all desks in a large main work area. This permitted FEE to use the space’s 4,500 usable square feet effectively today and while anticipating future growth. Custom pencil-clad pendant lighting over standup tables compliments the large digital artwork of a pencil, harkening back to the famous essay “I, Pencil” by FEE’s founder Leonard E. Read.

FEE is now established in Atlanta, using its gorgeous and affordable new office space as a fun and effective base of operations for nationwide events and a substantial–and growing–online presence.