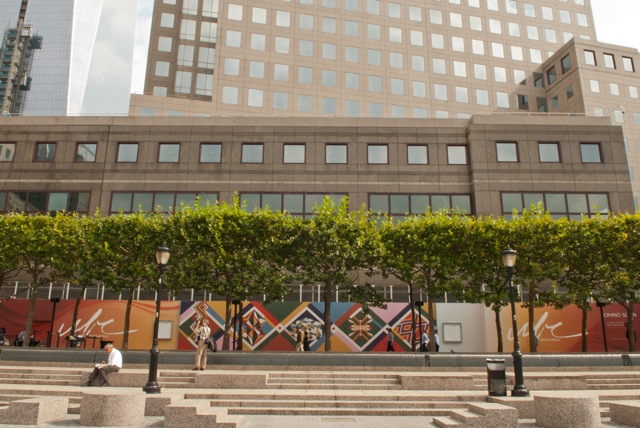 Lorenc+Yoo’s design for a construction barricade for the World Financial Center in New York was erected last fall. The barricade features maps, photographs, geometric shapes, and architectural renderings depicting the construction upon completion. Inside, a series of large television monitors display features of the new development through video. The barricade provides an attractive, informative cover to the property as it continues to be built.

In addition to winning awards for Vanke Opalus, Lorenc+Yoo won two other awards recently. The first is an award for our collaboration with Hnedak Bobo Group on the Northern Quest Resort & Casino in Airway Heights, Washington. Northern Quest won the award for “Best Native American Casino Facility Limited to Casinos or Casino Resorts” from Global Gaming Expo’s (G2E) Casino Design Awards. G2E’s awards are the preeminent citations in the gaming industry. Lorenc+Yoo designed Northern Quest’s signage and wayfinding system with a combination of natural materials such as wood, stone, and bronze along with traditional Native American themes to evoke feelings related to the casino’s Kalispel Tribe ownership.

Lorenc+Yoo is excited to announce it is beginning work on a new residential development by Vanke in Nanchung, China. Nanchung is the capital of Jiangxi Province in southeastern China and is developing quickly into a base for technological innovation and development–China’s Silicon Valley. Lorenc+Yoo’s work will include conceptual design for the development, including a marketing storyline.

Lorenc+Yoo is also engaged as a collaborator with real estate development firm Qatari Diar and JUNGLIM Architects of Seoul, Korea on a resort project in Libya.

Lorenc+Yoo partner Chung Youl Yoo was featured earlier this year at an exhibit of work by alumni of the Georgia Institute of Technology (Georgia Tech). Yoo, who earned his undergraduate and graduate degrees in industrial design from Georgia Tech, was selected to feature his work on the Sony Ericsson brand launch to celebrate Georgia Tech’s Industrial Design department’s 60th anniversary.