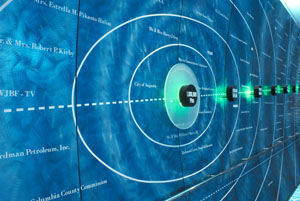 As government budgets tighten nationwide, non-profit organizations are turning to a more reliable funding source to make ends meet: private donors. While private donors are driven by a variety of motivations, most share an appreciation of being recognized for their gifts. Lorenc+Yoo helped the National Science Center in Augusta, Ga. to erect an impressive donor wall that not only lists the names of those who have contributed to the Center, but also speaks to its mission as a leader in scientific learning. 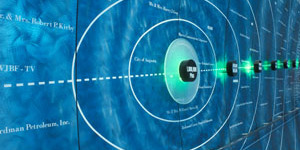 The National Science Center (NSC), a partnership between the non-profit National Science Center, Inc. and the United States Army, is focused on exciting America’s youth about math, science and technology. With many donors supporting NSC at a variety of levels, Lorenc+Yoo was charged with designing a donor wall that would not only accommodate more than 200 names, but also attract the attention of passersby with information about NSC and reasons to get involved.

Employing one of the museum’s central scientific themes, the donor wall is organized in the shape of a solar system, complete with planets, orbits and dynamic luminescence. Black planets denote various donor levels and sit inside elliptical orbits, with the highest levels positioned closest to the center of the solar system. The planets glow with fiber optic lighting that constantly shift color. A horizontal dotted line links each donor level planet to the center of the solar system, connecting each donor to the others and to the mission of the NSC.

Lorenc+Yoo’s design for the National Science Center is an appropriate way to recognize gifts of all sizes from donors and provide an incentive for new donors to contribute to the museum’s mission.